PML-N leader Ahsan Iqbal criticized the government’s suggestion to increase the income of salaried individuals by 10% and called the move the “worst joke”, taking to Twitter. 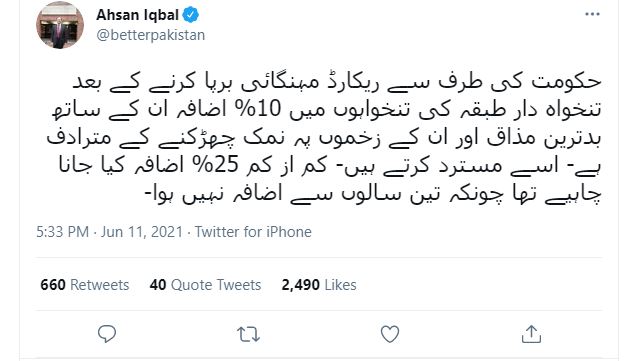 “A 10% increase in the salaries after record inflation is the worst joke made by the government with them,” tweeted Iqbal.

“We reject this. At least a 20% increase should be given,” said the former interior minister.

The PTI-led government proposed the Budget 2021-22 in the national assembly on Friday, which is highly opposed by the Opposition and its Leaders, whereas PPP and PMLN leaders criticized the government and their policies, stating that they won’t let this Budget pass through National Assembly.

Posted by Republic Desk - December 8, 2020 0
Prime Minister Imran Khan has on Tuesday reviewed political and economic situation of the country. While chairing a federal cabinet…

Posted by Republic Desk - October 14, 2020 0
US election holds immense significance not only for its own country but for other countries as well. The US president…

Posted by Republic Desk - October 28, 2020 0
LONDON: Trick or treating during Halloween is banned in the areas of England in the highest level of COVID-19 lockdown,…