Zhang Shupeng appears untroubled as he surveys the jagged mountains of a national park in central China — before diving head-first off a cliff to bullet down at 230 kilometres (140 miles) an hour.

Any potential disaster is averted when he opens a parachute and drops gently to the ground, Asia’s top wingsuit athlete in his element.

After China’s decades-long focus on rigorous, state-controlled training in established sports, aimed at winning medals and national glory, Zhang is among a different breed of Chinese sports star that is inspiring the next generation.

Zhang’s sport — one of the most extreme in the world — sees practitioners jump into the void from a mountain, a plane or a helicopter wearing a flexible, wing-shaped suit that allows ‘human flight’ in the form of a high-speed glide.

“When I walk up to the top, my pulse is racing. But during the flight I am super-serene,” 34-year-old Zhang told AFP with a smile, seconds before jumping off the majestic Tianmen Mountain in Zhangjiajie.

Custom-made in the United States, his red Batman-style suit cost more than 70,000 yuan ($10,000) and is emblazoned with a picture of the Great Wall, a symbol of his country.

Unlike the rest of the world, where many athletes are stuck at home due to anti-Covid restrictions, China has brought the virus almost completely under control.

That means Zhang has been able to return to training. 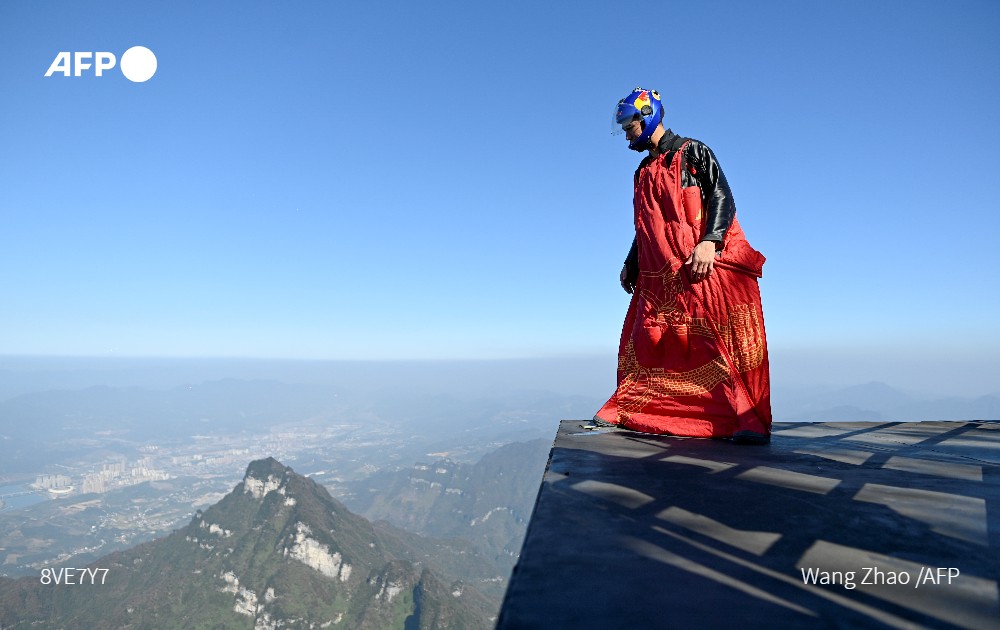 During a jump, the air rushes into the suit whose material goes rigid and generates lift, allowing him to glide in a more horizontal trajectory.

“I feel like a bird,” explains the former world paragliding champion, who has carried out more than 3,000 wingsuit flights.

“It becomes one with my body. By changing my posture, I can turn, speed up or slow down.”

Wingsuit jumping arrived in China in 2011, when American star Jeb Corliss glided through the “Gate of Heaven”, a 130-metre-high natural arch in Tianmen Mountain, in front of local TV cameras.

Zhang attended the first edition of the world championship the following year, held at the same location, and was hooked.

He left China to train in Europe and the United States, and by 2017 was among the best in the world.

Wingsuit jumping is a modern sport, unencumbered by the bureaucratic pressures of mainstream events like swimming or gymnastics in communist-led China.

“From something state, we are moving towards more and more openness,” said Zhang.

“The current environment in China allows and supports the emergence of sports which give more space to the personality of the athletes. It is my dream to make the image of Chinese athletes cooler.”

The sport inevitably comes with risks, including soaring too close to a cliff edge or a sudden strong gale throwing the jumper off course.

But Zhang, a former paraglider, is sanguine in the face of danger.

“There is no dangerous sport. There are just dangerous people, who want to go beyond their capabilities or challenge themselves with every jump,” he told AFP.

Despite his assertion, several wingsuit athletes are killed each year, including an American jumper who died in the Swiss Alps in September.

Zhang, who is married and has a little boy, says his family support him in his daredevil career choice.

“With my experience in paragliding, they know I know how to keep myself safe… I’m not going to do anything rash.”

Despite no competitions this year, because of the coronavirus, Zhang considers himself lucky compared with athletes still confined by restrictions elsewhere in the world.

“When the weather is nice, I can come to train here,” he smiles.

“I must be the happiest wingsuiter on the planet right now.”

Pakistan will continue its unwavering support to Palestine cause

Posted by Republic Desk - November 29, 2020 0
The Permanent Representative of Pakistan to the United Nations Munir Akram has said that Islamabad has remained a committed supporter…

Posted by Republic Desk - December 7, 2020 0
Pakistan International Airlines (PIA) has decided to cut 50 per cent salaries and allowances if its aircraft engineers. According to…

MashMix: Interview with Arooj Atiq of Yes, We Cake!

Posted by Republic Desk - January 14, 2021 0
Founder of Yes, We Cake, Arooj Atiq chats exclusively with Mashable Pakistan about her brainchild. Arooj, give our readers your…

Most expensive and biggest flag of Pakistan being prepared in Sukker!

Posted by Sobia Umair - February 19, 2020 0
One of the biggest and most expensive Pakistani flags in history is being prepared in Sukkur and will be unveiled…

3 soldiers martyred in unprovoked firing across LoC by Indian forces

Posted by Sobia Umair - April 4, 2019 0
Three Pakistan Army soldiers have been martyred due to unprovoked firing by the Indian army across the restive Line of…