ISLAMABAD: The Rawalpindi administration on Saturday allowed the entry of vehicles into Murree subject to several conditions from January 17, ARY News reported.

A notification was also issued by commissioner Rawalpindi in this regard.

According to the notification, 8,000 vehicles would be allowed to enter Murree daily from all points in normal weather conditions, while the hill station will remain closed for tourists till January 17.

The ban on entry of vehicles will not be applicable to the residents of Murree and Azad Kashmir, while the Chief Traffic Officer (CTO) will formulate the Murree Traffic Plan. 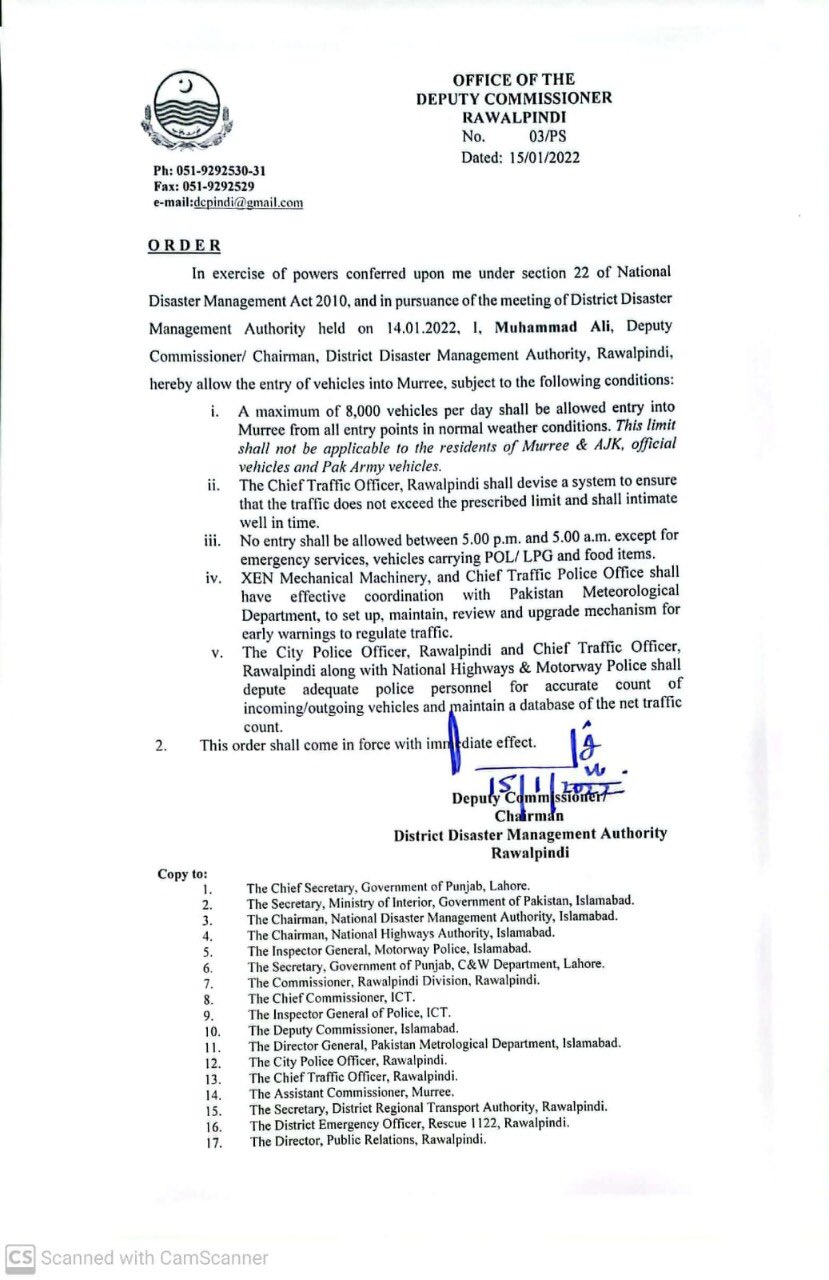 Tourists will not be able to enter Murree between 5 pm and 5 am. The CTO will be in touch with the meteorological department.

The federal government last week lifted a temporary travel ban on entry of tourists in Murree and Galiyat days after the Murree snowfall tragedy that claimed 23 lives last week.

This was announced by Interior Minister Sheikh Rashid while talking to ARY News exclusively.

It is pertinent to mention here that at least 22 tourists who were stranded in their vehicles due to heavy snowfall died of the extreme weather in Murree on night of January 7.

An initial investigation report of the Murree tragedy exposed the administrative flaws during the influx of tourists to the scenic hill station during snowfall.

Posted by Republic Desk - April 11, 2022 0
ISLAMABAD: The Islamabad High Court (IHC) on Monday rejected the petition seeking a probe into the alleged threat letter and…

Posted by Republic Desk - August 17, 2021 0
ISLAMABAD: Prime Minister Imran Khan received a telephone call from his British counterpart Boris Johnson on Tuesday, during which they…

PM Khan to address a ceremony in Malakand today

Posted by Republic Desk - March 19, 2021 0
Prime Minister Imran Khan will address a ceremony at the University of Malakand on Friday (today). As per the details,…

Posted by Republic Desk - January 27, 2021 0
Justice (retd) Azmat Saeed will investigate the Broadsheet scandal despite reservations from the Opposition parties. According to the details, the…