Russia has lifted the restriction on importing Pakistani rice.

Federal Minister for National Food Security Fakhar Imam, addressing a press conference in Islamabad stated that the restriction on the import of Pakistani rice was forced two years prior because of contrasts in quality.

He said that there is a market of 2.5 million tons of Pakistani rice in Russia and Pakistan is sending out rice to 140 nations.

On the contrary, the Adviser to Prime Minister for Commerce and Investment Abdul Razak Dawood said that Russia has at first allowed four firms to trade rice, while more organizations will be permitted after assessment by Russian specialists.

“Breakthrough in rice exports! We are glad to share that Russia has allowed the import of Pakistan’s rice from 11 June 2021. Initially, 4 firms have been allowed & more will be allowed after virtual inspection by Russian Authorities which would be coordinated by DPP,” he wrote on Twitter. 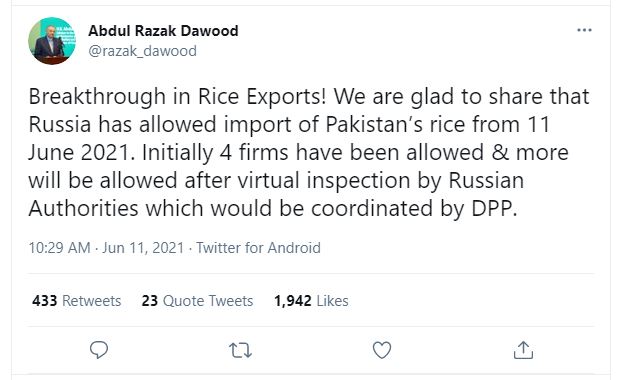 Posted by Republic Desk - March 1, 2021 0
Making large transactions from banks is considered to be a risky affair as you have to be very careful while…

Lord of the Rings’ Gandalf euphoric after receiving COVID-19 vaccine

Posted by Republic Desk - December 17, 2020 0
LONDON: British actor Ian McKellen, who played the wizard Gandalf in the Lord of the Rings movies, said he was…

Posted by Republic Desk - February 1, 2021 0
Dozens of Republicans in former President George W. Bush’s administration are leaving the party, dismayed by a failure of many…

Academic year of schools in Punjab to begin on August 1, Murad Raas