Tarek Fatah, a prominent name circulating everywhere on news channels, social media, and amongst the people of India and Pakistan for many years, but unfortunately not in a very amusing way.

Fatah is a Pakistani born Canadian author and journalist. Also, a founder and a prime mover of Muslim Canadian Congress, for which he served as a spokesperson. Also, he is the recipient of the famous Donner Prize and Helen and Stan Vine Canadian book award as well. Still, he is the one most notorious and abhorred man amongst Muslim countries because of him spewing hate and filth against Muslims and ridiculing their scriptures and beliefs in every possible way.

Tarek Fatah was born in Karachi, Pakistan to a Punjabi Muslim couple in 1949. He completed his higher education from the University Of Karachi and later joined Karachi Sun as a reporter before becoming the investigative journalist for PTV. Soon his involvement in political wings and becoming a leader for the leftist student organizations demolished his career. The act of extreme sedition charged against him and he got restrained from journalism. Later on, he showed his back to his own country and flew away to Saudia Arabia before permanently settling down in Canada. He got married to Nargis Tapal, a Shia-Bohra girl from a Gujarati background, and became father to two daughters Nazia Fatah and Natasha Fatah. Natasha works as a Canadian journalist like his father and married to Chris Kayaniotes.

Fatah notoriety ascends as soon as he shook hands with India and started spreading baseless rumors and spitting venom against Muslims, especially Pakistani Muslims. His hatred for Pakistan isn’t concealed under any covers. Besides being a Pakistani born and expatriate, he feels no shame in disgracing his motherland, which gives him the tongue that he is using against it, instead, he feels proud to be India’s illegitimate child and take it as an honor to dance to its tune to get the appreciation from his Supreme Fathers.

Tarek Fatah claims to be a leftist and acts like a liberal activist while it has been proved that both liberal and left in India hate him for his peddling of Hindu extremist propaganda. His activism usually revolves around showing the world a morph and unfactual image of Islam and Pakistan. He is a patron to Gay rights, supports the rebel’s “Free Baluchistan Movement”, opposes Shariah Law, opposes Niqab, and calls for a ban on Burqa and the clear opponent of Motion 103 that called Canadian Government to condemn Islamophobia – he does all that after pretending to be a secular progressive person which in reality is far from the truth.

If Tarek Fatah was a liberal and progressive person as he pretends to be then he would not act like a stooge for right-wing Hindutva forces in India. Never has he ever condemned a single incident of violence against Muslims in India and while he claims to support free Balochistan movement by accusing Pakistan for doing injustices to the Baloch citizens, he has never condemned India’s known oppressive rule over its Northeastern states like Nagaland, Manipur, Mizoram and Assam. He on the other hand goes to an extra mile by pushing the Indian government to further its genocidal policies in Indian Occupied Kashmir.

He wants the world to see Islam and Pakistan through his blurred spectacles of biasness. To get his mindset and perceptions clear, one should know that he is a keen follower of Salman Rushdie, who was a Muslim born author and wrote much blasphemous content about Prophet Muhammad (P.B.U.H) and Islam that caused the intolerable fire of anger, hatred, and pain amongst Muslims worldwide. But seems like Fatah found a mentor in him. At one point he stated “I’m one of the Salman Rushdie’s Midnight’s Children” Here are the few strategies which he uses to fulfill his mission of sabotaging image of Muslim society and Pakistan:

Using Pakistani Muslim Identity To Convince The World With His Theories:

This is the most effective conspiracy to use against the nation where he once lived and brought up. The society listens to the native’s tales more than an outsider’s story. Fatah uses his Muslim background and Pakistani ethnicity to spoil the image of his native land and religion. He spreads fake information regarding Muslim beliefs, scriptures, and history. He claims himself a preacher and a defender against Islamophobia, he works as a principal character in promoting it. Some of his Anti-Islamic and Anti-Pakistan quotes which were taken from his articles, speeches, and videos are listed below:

“All you need is a powerful influencing tongue, and people will buy even the stinkiest trash from you at the price of treasure”

This is the rule Fatah follows and undoubtedly, it won him many sales of his reeking lies. He is an active member on Twitter with over 60 lac followers and using this platform to peddle his fake news and false information. But you can’t fool the public all the time. After selling so many fake news successfully, he became overconfident and started making huge mistakes while posting fake news. Here’s how:

Tarek Fatah posted this image on his twitter that how a woman in Pakistan denying to give polio drops to her children. However, famous Pakistani Actress Mehwish Hayat slammed him by correcting that this image is a still from her movie Loadwedding, where she was playing the role of a Polio worker.

Another proof of Mr.Fatah stooping the lowest level of sanity to utter shit about Pakistan. This means he literally can come up with any possible nonsense just to sell his drugs. This is the picture is from World Cup 2019 and before India vs Pakistan match where then chief selector and former cricketer Inzamam ul Haq along with Sarfaraz Ahmed were checking the pitch, on which Fatah makes an incredible story that how Pakistan called a MULLAH to bless the pitch before the match. Height of insanity!

There isn’t any doubt about how much The Fatah hates Islam and Muslims, but for an old renowned author, going beyond the lines of falsehood and fabrication, just to prove his stance is ridiculous and unethical. A video of a teacher gone viral by this hatemonger in which he was shown teaching students hate against Hinduism which was already confuted by a news channel showing the actual image a few days before his tweet where the teacher was teaching students something in SANSKRIT. 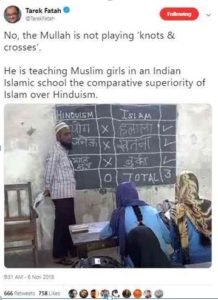 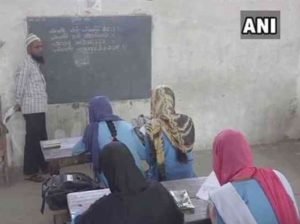 Using the Biggest Enemy of Pakistan and Islam; INDIA, to Execute His Dirty Plans:

Whoever knows about Pakistan’s History, knows how India hates Pakistan and Muslims and plays filthy games to make Pakistan suffer in any mean. Pakistan is in a state of constant war with India because of its warmongering approach. However, after claiming straying pigeons as ISI agents, and blaming Pakistan for the Natural Disasters, India is now making its puppet dance and entertaining the whole world by making him creating misconceptions about Islam and Pakistan. India hosted his show “Fatah ka Fatwa”, in which he spreads so much hatred and misconceptions about Islam that the Delhi High Court had to call for the dismissal of the show. But he did not stop there, he came again with another show called “What The Fatah” and using it carefully to destroy the image of Muslims And Pak Land.

But do you know the funny part, that Fatah is not even credible in India? Yes, even after obeying his “supreme fathers” and swaying to their snake flute, Tarek Fatah is still untrustworthy and treacherous for India.  On multiple platforms, India shows its doubts and suspicions regarding to Fatah’s credibility.

That’s obvious though. One, who can deceive its own motherland that gives him identity and shelter, he can deceive anyone in this world, and whatever you say, the fact is India hates traitors. India is just using him as a pipe to pour shit over Pakistan and Muslims all over the world for gaining attention and applause from different ISLAMOPHOBIC states, but once his job is done, he will be thrown in the Sacred River of Ganges as a sacrifice to wash off their sins.

More Baloch Got Murdered By ‘Missing Persons’ – Why the Liberals are Silent?

Posted by Maya SH - September 1, 2020 0
Why No Voice Is Condemning the Homicide Of These Poor Balochs by professed ‘Missing Men’ Balochistan – the land which…

Beautiful Story Behind This Strange Couple

Posted by Republic Desk - October 11, 2020 0
Life is a breathtaking journey – but it’s also an experience that we master as time goes by. When the…

Posted by Maya SH - November 2, 2020 0
Marriage is indeed one of the most beautiful events of a person’s life. It’s a time when two souls start…

Posted by Wajiha Raghib - October 18, 2020 0
Several months into the pandemic and millions of lives lost, there are still many people out there who think this…