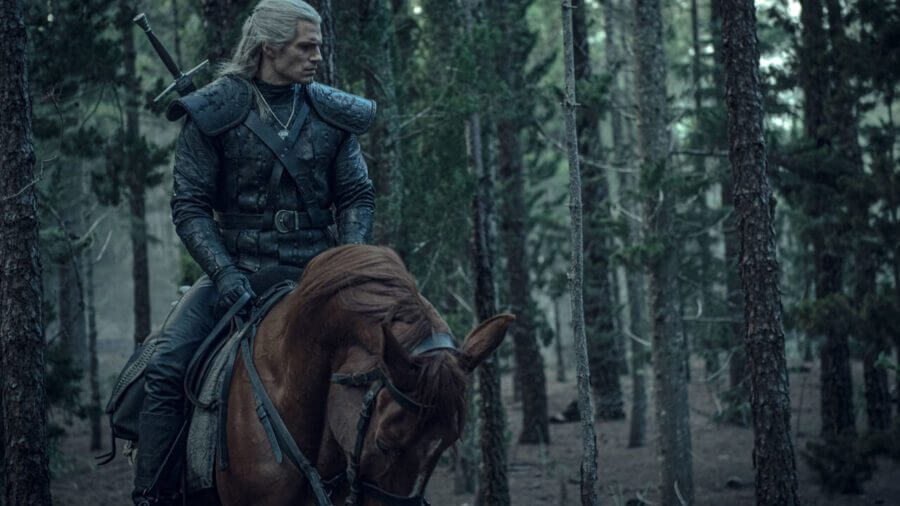 September 2020 opened with the shocking news that Netflix is hoping to cast Aquaman’s Jason Momoa in the lead role of The Witcher’s prequel show, Blood Origin, but that was just the beginning. Ever since filming resumed for the second season of the fantasy hit, following five months of COVID-induced hiatus, news of the upcoming season and its two spinoffs has been plentiful. Read on for the Continent’s latest casting news, production updates, and spoiler reports.

We also did a mid-September 2020 update for The Witcher news right here on What’s on Netflix which you can still catch up on.

The Witcher season two has enlisted four new directors, each helming two episodes filmed back-to-back and almost chronologically, with each director in charge of one of four “blocks” of shooting.

The first director of the coming season is Umbrella Academy’s Stephen Surjik, who suffered most of the challenges of filming before, during, and after the breakout of the Coronavirus pandemic. After overcoming a five-month-long hiatus, rescheduling, reshoots, and the recasting of a major role, Surjik has finally wrapped his episodes for season two.

In other words, the second season of The Witcher is 25% complete after tackling several COVID-related production hurdles. With “block one” complete, Surjik will be replaced by The Last Kingdom and Cursed director Sarah O’Gorman, who’s in charge of episodes three and four.

O’Gorman has been preparing for filming for quite some time, after scouting locations such as the beautiful ruins of the Fountains Abbey, and will be joined by new and returning cast members. One notable return is Mahesh Jadu, who plays the mysterious mage Vilgefortz and has already begun filming scenes alongside Lars Mikkelsen (the mage Stregobor).

Besides them, the cast has been filming scenes in Arborfield Studios with Henry Cavill, Freya Allan, and an assortment of new cast members who play the witchers of Kaer Morhen.

It’s my last day on set with @SSurjik. I didn’t expect his 2 episodes to span a global pandemic. But they did, and I couldn’t have had a better partner by my side. Grateful for his vision, leadership, spirit, and friendship. @witchernetflix S2 is back and better than ever. ♥️⚔️🐺 pic.twitter.com/xBMRCydQoX

Back in February, when Netflix revealed seven new cast members who were joining Cavill in season two, the fans were excited to see Thue Rasmussen among them.

Rasmussen was cast as Eskel, a fan favorite witcher among gamers. Sadly, the pandemic forced the production to halt, delaying filming by five months and creating scheduling conflicts that Rasmussen could not solve.

Because of that, Rasmussen had to forfeit the role (after filming scenes for the role in Arborfield Studios in March), and Netflix was forced to find a replacement.

After first being spotted on set and later being rumored as Rasmussen’s replacement, Netflix finally broke the news: Basil Eidenbenz has been cast as Eskel. The Swiss actor is most known for his roles in The Athena and Victoria. Fans have also noticed that Eidenbenz and Rasmussen look quite similar, and that could be one of the reasons he was chosen (besides his acting prowess, of course).

After the announcement, Rasmussen was quick to congratulate Eidenbenz on being cast in the role. 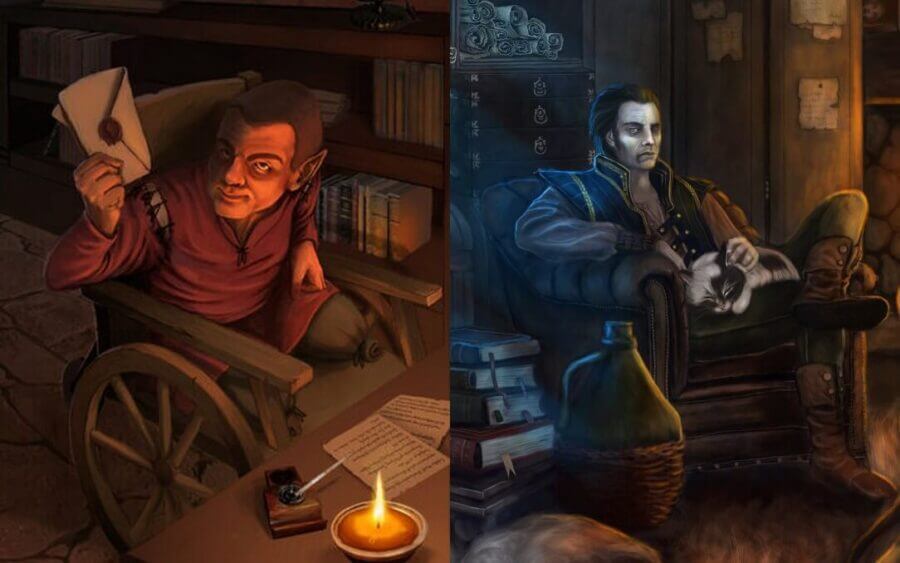 Besides filming, Netflix has been hard at work casting new actors for roles in season two and the upcoming Witcher prequel Blood Origin.

Most recently, Redanian Intelligence has uncovered an audition by British actor Ian Jay (who played one of the Joker’s henchmen in The Dark Knight). All the clues point to a key character who appears in Andrzej Sapkowski’s novel Time of Contempt: Jacob Fenn.

Fenn and his partner-in-crime Codringher manage a notable law firm and detective agency in the Continent, which Geralt employs to help identify his enemies.

After uncovering the audition, Redanian Intelligence was able to confirm with sources close to the production that the pair will indeed appear in season two. Codringher and Fenn have a brief but memorable role in the novels, and fans of the books are happy to see them included in the show. However, their early appearance does come as a surprise.

Considering where season one left Geralt, Yennefer, and Ciri, season two is poised to adapt the first full-length novel in the Saga, titled Blood of Elves. However, Codringher and Fenn appear a bit later, in the next novel. Fans are now wondering whether season two will delve deeper into the story than first expected.

For a transcript of the audition and another actor who’s likely up for the role, make sure to read the original report.

Early concept work for episode 203 suggests a new monster, Ciri training, and the return of the eels

Earlier in September, Redanian Intelligence reader Lorenzo tipped us on an intriguing lead that sheds some light on season two’s third episode. Naturally, there may be mild spoilers in this section of the article, so be warned if you want to watch season two with no prior knowledge.

The new information on episode 203 comes via an online “mood board” shared by a member of the production.

The now-deleted file included various pieces of fan art used as reference and inspiration for scenes in the episode, including a couple of hand-made sketches. The mood board revealed three key details, and the first and most notable of them is Ciri’s witcher training. It appears that the production team was looking to emulate the novel’s Kaer Morhen obstacle course, in which Ciri spent a considerable amount of time training with her sword.

The obstacles mentioned are the pendulum, the windmill, and the comb, and the production member included sketches and in-depth descriptions for each of them (which you can read in the full Redanian report).

Besides Ciri’s witcher training, which we had already expected to see in episode 203, the file includes two curious mentions. The first is a mention of the “eel grotto”, a location that has already appeared in season one.

For those who don’t remember, the eel grotto is a cavern beneath the Aretuza school of sorceresses where failed students who were turned into eels empower Aretuza’s magical reserve. This particular detail has been created from scratch for the show, as it did not appear in Sapkowski’s novels. We’re interested to see how the eel grotto will once again factor into the story. Perhaps there is still hope for eel justice?

Last but not least, a monster called the “myriapod” was mentioned. Though the name seemed unfamiliar at first, the monster has appeared in both the novels and CD Projekt RED’s video games: the giant centipede. The monster first appeared in the short story The Sword of Destiny. The scene with the myriapod happens to be the very first Ciri scene in the saga. In the novels, Geralt first meets Ciri quite a bit earlier than in the show, when he travels into Brokilon Forest to parley with the dryads.

On his way to the dryad city of Duen Canell, Geralt and the dryad Braenn hear a child scream, and they find the girl being attacked by a giant centipede (called both a scolopendromorph and a myriapod in the English translation). Though the Brokilon storyline was changed completely in season one, it looks like the writers of season two wanted to honor the moment of Ciri’s introduction in the second season. If this is the case, it’s likely that Geralt will take Ciri on a monster hunt as part of her training in Kaer Morhen, and that the monster will be a giant centipede. Of course, it’s also possible that the monster will appear in another storyline, such as Yennefer’s.

One thing that is important to note, however, is that this mood board was likely created very early in the development process. Since then, the show has undergone several drafts of the script and some of these elements may not have made it into the final version. That being said, it isn’t likely that major narrative moments were changed.

The Witcher – Blood Origin. Day one!
Beyond lucky to be working with such talented writers. Pinching myself! pic.twitter.com/tZkMlH3u3v

Besides season two of The Witcher, Netflix is also developing two spinoffs. The first is an anime film starring Geralt’s mentoring witcher Vesemir, which is likely to release before season two (and hopefully very soon). The second is a limited series which will serve as a prequel to the show, set hundreds of years before Geralt, Ciri and Yennefer meet on the Continent. The prequel will tell the story of the first witcher, and it was revealed earlier this month that Netflix is hoping to sign Aquaman star Jason Momoa for the role.

The prequel’s showrunner Declan de Barra, who wrote an episode for each of The Witcher’s seasons, has recently shared an update on the project on his Twitter account.

Despite COVID complications, the writers’ room of The Witcher: Blood Origin has assembled to begin plotting and writing the six episodes of this prequel series. For a full breakdown of the writers involved, including Carnival Row, Swamp Thing, Moon Knight, and Snowpiercer talent, head over to the full Redanian report.

If you’ve missed our Mid-September update, make sure to check it out for all the details on Jason Momoa’s possible casting and a spoiler report from Kaer Morhen that features an interesting diversion from the novels. For all the latest Witcher news, follow Redanian Intelligence on our twitter account.

The strategic ML-1 project of CPEC gets final node

Vehicle explodes in US city of Nashville, police call it an ‘intentional act’

Posted by Republic Desk - December 25, 2020 0
NASHVILLE: A vehicle exploded in downtown Nashville on Christmas morning in what police described as an “intentional act,” and fire…

Posted by Republic Desk - November 3, 2020 0
MUSCAT: The Sultanate of Oman has banned the usage of single-use plastic shopping bags starting from January 2021 in order…

Posted by Republic Desk - October 5, 2020 0
Singapore’s Changi airport has warned of a ‘daunting period’ as the coronavirus pandemic keeps leaving impacts. As per the rankings…

Posted by Republic Desk - November 16, 2020 0
Pakistan has categorically rejected the Indian Ministry of External Affairs’ denial of the irrefutable evidence provided by Pakistan on Indian…